With the release of iCloud on Wednesday, Apple has been dipping in the cloud computing pool recently with significant ongoing investments – in 2009, the company announced plans to spend billions of dollars on a data center in North Carolina over the course of nine years to support future projects. Asmyco.com reports the total spend to have hit $1 billion last December, while the down payment for the 500,000 square foot cloud data center is estimated at $750 million.

With over a billion spent on cloud computing costs, including servers, storage equipment, personnel, R&D, bandwidth and more, Apple has been investing aggressively to keep iTunes, Apps, iCloud and its other cloud-based services on par with demand.

However, the NYTimes.com Bits blog reports numerous error messages while using the new iCloud software designed to sync multimedia across numerous devices. The problems are attributed to a major spike in traffic and simultaneous downloading of the new software update, but similar issues occurred during the first few weeks of the MobileMe launch several years ago. 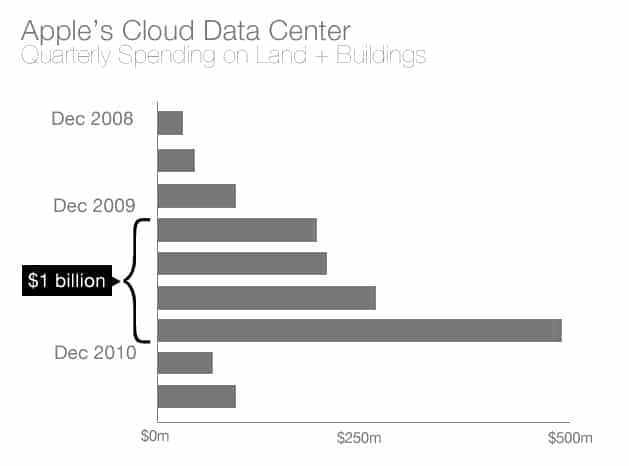 Will Apple’s iCloud introduce serious competition to Gmail, Google Docs, or Google Sync? The iCloud is Apple-only, meaning it doesn’t support a wide variety of Windows or other brand devices. Google Sync does allow you to use different devices, including Windows, Android, Blackberry, Noki and Apple devices. This difference could affect a wider audience, save the group of primarily only-Apple users.

Apple’s iCloud is consumer-facing, but what about cloud computing for businesses? Read more about the Benefits of Cloud Computing for Businesses to find out how the cloud is cost-effective, flexible and customizable to adapt to business needs.

Sources:
Customers Run Into Trouble in the iCloud
The Down Payment on iCloud
Apple Already Spent $750 million on the iCloud Building Alone?
Report: Apple Has Spent $750m on iDataCenter
iCloud for Business Travellers

The Cloud Conundrum: Choosing the Right Cloud for Your Business

Get in touch with an Otava Rep today – just provide us with a bit of information below to get started and we’ll reach out to you shortly!